Which one are you voting for this electoral season?

I’ve been drawn into a few debates with friends on Facebook about this stuff.

One friend, who happens to be from the left side of the fence, kept going on and on (and on) about how terrible everything that we do is – how, because of our consumption, we’re exploiting workers all over the globe. She went on about how poverty is caused by rich people skimming off the top. Then she went on to express that the USA is headed down, towards the scrap heap of history. She got angry at me when I said that poverty comes from a belief system. She told me I was blaming the poor for their suffering.

There are some powerful underlying ideas behind her anger.

Is politics ever a long-lasting solution to anything?

Is there really a boogeyman (such as rich folks) to whom we can pin all the blame for the “bad” going on in the world?

On the first question: Think about all the countries where a dictatorship was overthrown in a coup, in the name of democracy — only to be replaced by another flavor of dictatorship. Maybe people in those instances aren’t ready for the freedom of democracy. They may want freedom in principle, but they’re not fully ready for it, deep down where their beliefs lie. This enables a dictator to come in and grab power, before people finally make that core shift in their beliefs – which can take decades.

Think about the former USSR states, especially Russia. While they ostensibly have free democratic systems, there’s a ton and a half of corruption. There’s really only one party at this point. The large corporations are in bed with politicians, and vice-versa. If you think the US is bad, it pales in comparison to the corruption in Russia.

Where does all that corruption come from?

It comes from a populace that is cynical to its core. The populace doesn’t believe that any politician can act out of anything but self interest (nor any person, for that matter). So, the population tolerates it, because it believes that’s just how people are.

Notice the word “tolerates it.” In the US, we still have enough people who don’t tolerate that kind of stuff, that we’ve managed to avoid sinking to that level of greed and corruption – so far.

Yet our tolerance is slowly creeping forward, allowing more and more of the greed and corruption. That tolerance comes from expectancy. In other words, if you expect a certain behavior from someone, you’re far more likely to tolerate it.

For example, I see parents on the playground frequently tolerating aggressive behaviors from boys, but much less so from girls. Why do parents tolerate that from boys more than girls?

Because they expect it. “Boys will be boys.”

So, does the choice between the one guy and the other guy running for office really matter?

It may matter, just a tiny little bit. There are some differences in the policies that they would implement. Those may have some effect on people’s lives.

But what matters far more are our expectations, both individually and collectively.

If we take the cynical view that things are broken, headed completely on the wrong path, and that there’s no fixing it because of greedy, self-interested politicians and/or businessmen and/or investors, then that’s what we’re going to get.

The real person you need to vote for this upcoming election season is yourself. Voting for yourself doesn’t involve going to the booth and punching a ballot.

It involves taking responsibility for your own beliefs. It means taking your power back. It means not tolerating gloom-and-doom, world-is-ending thinking. (you get what you expect, and you expect what you tolerate!)

There are problems to solve. Plenty of them. But they won’t get solved by any politician, until the populace truly believes that a solution is necessary and viable.

The politician is just the vehicle. It’s the beliefs of the populace that are the driver. Where do you think the guilty and/or cynical handwringing is going to take the car? Off the road.

Your worry should be: do I have some not-so-obvious belief systems that are preventing me from lowering my tolerance, and raising my expectations?

While my friend told me I was blaming poor people for their poverty, this is what I was really saying: I’ve met at least 7 people over the past two years who went from abject poverty to millionaire status. How did they do that? At some point, they decided to stop tolerating their own poverty. They got fed up with it. So they adjusted their beliefs, and figured out how to make it work.

One of them now drives a Rolls Royce and has 60 surfboards. Is that excessive? If you think so, who are you to judge? He eventually decided that living in a trailer home without any running hot water wasn’t tolerable. It took him 5 years of intensive study and hard work to make his first million, and he’s done it many times since then.

Should he be giving that money to the poor instead? That thinking is a trap. See, if he hadn’t had the motivation to rise above his own poverty, the motivation to work his butt off so that he could drive the fancy car, he would still be broke and living in a trailer home (or dead from an OD). That wouldn’t be helping the poor any more than his driving a Rolls is. And, in fact, it’s quite likely that at some point he has contributed to causes like helping those in poverty (I haven’t asked, but most millionares I’ve met do make substantial contributions like that).

Is it easy to raise your standards like the now-millionare did? Hell no. But do you think that a political decree is going to lift someone out of poverty if their belief systems are all screwed up? Well, if you do, then you may still believe in the tooth fairy as well.

I don’t “blame” poor people. What I blame is an educational system that doesn’t teach people to examine their beliefs, and to understand the impact that those beliefs have on their reality.

Instead, we’re taught to be just docile pawns in the game. We’re taught to believe that we have no real control over our lives except for the occasional foray to the voting booth to select one guy or the other.

What my argument with my liberal friend on Facebook was really about is this fundamental difference in world view. She buys into the cynical notion of lots of greedy people causing all sorts of wrong and bad around the globe. She expects that as a result, we’re headed down the tubes. Because she expects it, she tolerates it. And we know where that tolerance leads to….

Having gone through a cycle of thinking much like that myself, and seeing my life go substantially downhill in the process, I eventually decided to no longer tolerate it. I’m here to enjoy life on this planet, not to suffer in a cycle of cynical misery and doom. You are here to enjoy life too. But you can only enjoy it if you raise your standards, and stop tolerating the mental junk from yourself.

This electoral season, vote for yourself. Work on your own beliefs for what’s possible for you, and for what you tolerate and expect from the world. Use your creativity to come up with new solutions to the problems you see around you, rather than just expecting some politician to swoop in and fix it (they won’t).

Democrats: No wonder you lose, you sound like hard work (and why it doesn’t matter that you’re right) 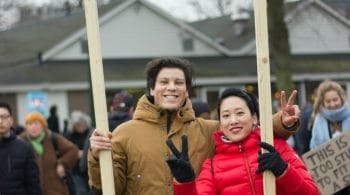 Democrats: No wonder you lose, you sound like hard work (and why it doesn’t matter that you’re right)

4 replies to "Which one are you voting for?"